A decision emerged to proceed and in due course the twinning charter was signed. To celebrate the first visit of a Kinsale group the Langland Court Hotel, owned by Colin Birt, a leading representative of the local hoteliers, threw a memorable garden party attended by the Gwalia Singers and the colourful John de Courcy, aka Lord Kingsale (sic), known as Ireland’s Premier Baron.

During the heyday of the Swansea–Cork ferry and the short-lived air link the twinning relationship between Mumbles and Kinsale flourished but gradually fell away after Kinsale’s local council was absorbed into the county of Cork.

By then, however, a new partner had emerged from Brittany. This time the initiative came from Mumbles during 2003, although Hennebont was already looking for a partner in Wales. Agreement was soon reached and sealed by reciprocal charter-signing ceremonies in All Saints Church, Mumbles, on 28 May 2004 and subsequently, in May 2005, in Hennebont. A new partner, Havre de Grace, was added in 2019.

Grateful thanks to Jean Bunce, one of our honorary life members, for this information.

In 1992, following preliminary discussions in Kinsale involving Mumbles Community Councillor Peter Jones, a representative of the Kinsale Chamber of Tourism telephoned Jean Bunce at the Mumbles Tourism Information Centre, where she was manager, to formally suggest a twinning link with Mumbles. A golfing connection between the two communities already existed. Jean took the idea to the Mumbles Chamber of Trade who made their support clear.

Links were established between Mumbles Community Council and Kinsale Urban District Council. A steering committee was set up to broaden the local support base for the initiative and to coordinate consultative visits between Mumbles and Kinsale. Extensive consultations and discussions took place in Mumbles. Numerous local organisations were keen to be involved, including the Vintage Vehicle Register, the local branch of the Royal British Legion, the Tourism Information Centre, the Langland Bay Golf Club, local hoteliers, the Chamber of Trade, the Yacht Club, rugby and football teams and the Mumbles section of the Women’s Institute.

* With apologies to Stephen Hawking 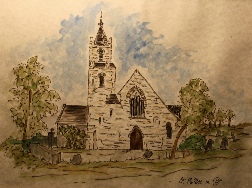 Two original paintings from Kinsale presented to MTA serve as a happy memory of the former link between the two communities. 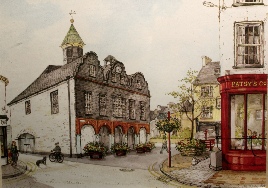