An alpaca walks into a French optician’s...

The following story is from the BBC News website, 19 January 2019. The story made the national news on BBC1 TV.

An alpaca has confused and delighted residents of a small French town after wandering into an optician’s shop.

The fuzzy creature spent half an hour quietly browsing lenses in the town of Hennebont in Brittany.

Employees closed the doors to stop it fleeing before calling the police.

While they initially thought it had escaped from a nearby circus, authorities found the private owner who came to pick up the wayward animal shortly afterwards.

“We saw him walk past the shop, he stopped in front of the automatic doors that opened, and he walked in very quietly,” employee Helene told Le Telegramme newspaper. “He was not at all aggressive, he was just doing his thing.”

The four staff members locked up the shop for fear the animal could run into the streets and cause an accident, before calling the authorities.

Within half an hour the owner – who wished to remain anonymous – had arrived to collect the alpaca.

It seems to have wandered off a private lot nearby.

We hear from Maryland that the first-ever meeting of the newly formed Havre de Grace Twinning Association took place on 15 January, in the home of Debby and Chris Stathes, with about 25 people present. On 4 February, Debby presented the new association to the HdG City Council and general public, with cable TV cameras recording her presentation. “Enthusiasm for twinning seems strong,” she wrote to us in a subsequent email. 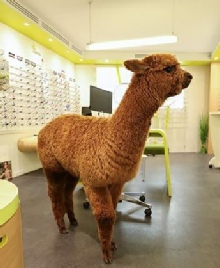 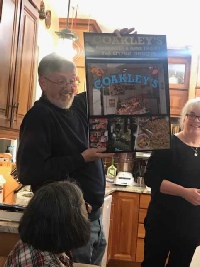 Chris and Debby Stathes presenting the glories of Mumbles.