A joint initiative by TAM, working with the Hennebont Comité de Jumelage (twinning committee), will see a two-way exchange of locally themed books and artefacts between Oystermouth Library and its equivalent in Hennebont.

Judy Knight, the Library Manager at Oystermouth, then suggested that TAM should mount a display in the library. Lorraine Davies prepared a set of display materials about the benefits of twinning, facts about Brittany and Hennebont, and TAM itself, which can now be seen in the library.

When the artefacts from Hennebont arrive they will be added to the display.

... as Micheline R. Ramos once said. Apparently she was a ‘wine lover’: nice work if you can get it... At any rate, 62 imbibers of Mumbles pretty much followed her advice to the letter at TAM’s wine-tasting evening in the West Cross Community Centre on Friday, 15 February.

The wine-tasters were guided, and frequently misguided, through a series of questions about various French wines, by Jenn Barnes and Jean Marnell, two ladies with a fine satirical eye for popular ignorance about wine.

An exceedingly good time was had by all, aided and abetted musically by Con & Bob, a sort of French-themed version of Tottenham's Chas & Dave. 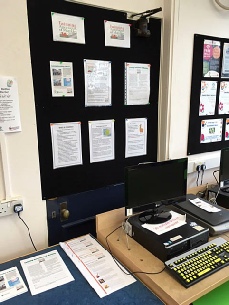 Below: The TAM display in Oystermouth Library 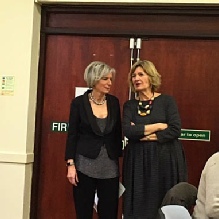 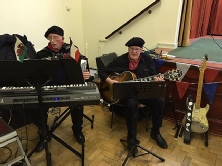 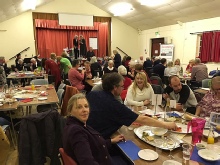 Mistresses of Mischief Jenn and Jean