Thirteen TAM members (one doubling as Chair of Mumbles Community Council) visited Hennebont in the week of 10th June to celebrate the fifteenth anniversary of the signing of the charter. The week’s centrepiece was the unveiling of the plaque commemorating Yves Pezron, an official gift from Mumbles to Hennebont, which was an initiative by TAM and generously financed by MCC.

The plaque, designed by lettering artist Ieuan Rees in his Ammanford studio and cut on Welsh slate, had been despatched by TAM several weeks before. Its unveiling took place on Thursday 13th June at the newly prepared Place de Mumbles at the top of Hennebont’s handsome town square, where a granite block had been erected on which the plaque was mounted. Carrie Townsend Jones (the aforesaid MCC Chair) unveiled it together with André Hartereau (mayor of Hennebont) and the historians Professor Prys Morgan (TAM’s Honorary President) and Jacques Guilchet (from Hennebont), whose shared interest in Yves Pezron had provided the original germ of the idea for creating the plaque. (Click here to catch up with the backstory about the plaque.)

Afterwards there was a much larger ceremony inside the comfort of the mairie, with vin d’honneur and nibbles. Additional gifts were presented and speeches made by assembled dignitaries, including a keynote speech by Carrie (given in French: click here for an English version of the text). The large crowd included official visitors from Kronach, Hennebont’s twin town in Germany.

Other highlights of the week included a guided tour of the world-famous village of La Gacilly, a day trip to the astonishing so-called Vallée des Saints (actually a hilltop) on which over a hundred huge modern stone carvings of saints loom rather like a European version of Easter Island, and a barbecue which, although rain-lashed, was much enjoyed inside a marquee in the fabulous woodland garden of John Polly, a member of the Hennebont Jumelage and a most generous host.

All in all it was a most enjoyable visit. It made the whole twinning ‘thing’ feel worth all the effort, bringing people from different countries together to share time and space and practise each other’s languages. Vive la différence! 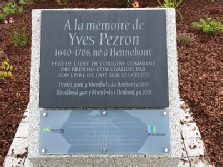 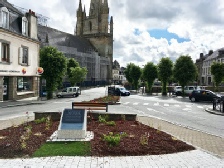 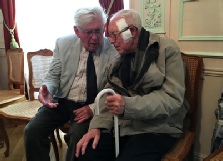 Click the top two images to see in full size.