A Tale of Two Twinnings

This press release was issued by Mumbles Community Council following the official inaugural visit to Mumbles from Havre de Grace between 5 and 10 September. It only seems necessary to add our own thank-you footnote.

Twenty American visitors from Havre de Grace, Maryland, arrived in Mumbles on 5 September for a five-day visit to mark the start of a new twinning relationship between the two communities.

The idea of twinning was first suggested by Debby Stathes, who with her husband Chris has a holiday flat in Langland. Debby, who was born in Swansea, now lives in Havre de Grace but returns to Langland at least once annually. Each time she made the trip she became more aware of similarities between the two communities: seaside locations (Havre de Grace is on Chesapeake Bay), lighthouses, a history of fishing and seafood harvesting, and so on. “But it was only when I found out that Mumbles was already twinned with Hennebont that I realised there was an existing mechanism to formally link Havre de Grace with Mumbles,” she said.

The centrepiece of the inaugural visit was the charter-signing ceremony on 7 September at Swansea’s Guildhall presided over by Deputy Lord Mayor Councillor Mark Child, who represents West Cross on Swansea Council. The charter of twinning, created by the Gorseinon calligrapher Judith Porch, was signed by Havre de Grace’s City Mayor, William T Martin, Mumbles Community Council’s Chair, Carrie Townsend Jones, and the chairs of the two

Other highlights included a guided tour of Swansea University’s Bay Campus, a ‘Stumbles Around Mumbles’ literary guided walk led by the Lighthouse Theatre Company, the opening concert of the Mumbles Festival of Music & The Arts, a day trip to the St Fagans Food Festival and a twmpath featuring the Tawerin Dance Company at Mumbles Pier.

The visitors stayed with host families from Mumbles Community Council and the Twinning Association of Mumbles. A return visit to Havre de Grace is scheduled for October 2020.

Our grateful thanks to: 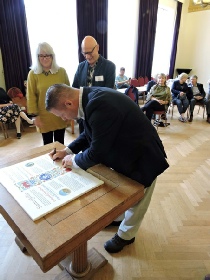