Starting on Monday 13 January at 11 am at Oystermouth Library, TAM will present the first of a monthly illustrated series of short interactive talks about twinning: what is it about? What does it achieve? Who benefits, and how? What actions and activities are involved? How can you become involved? And what is the story of twinning in Mumbles?

All the talks will be free and open to everyone. What we hopefully mean by ‘interactive talks’ is that they will not be short lectures so much as discussions involving everyone present. And refreshments will be served!

As of 12 March 2020, this series of talks has been put on hold until the coronavirus emergency has ended, when they will start again.

At the 2020 Annual General Meeting held at Norton House Hotel on 17 January, members voted to appoint Lorraine Davies as TAM’s new General Secretary. Thanks were expressed to our Treasurer, Julian Smith, who for more than a year has filled in as acting secretary. Members also voted to create a new post of Events and Culture Secretary and for Sarah Lever to take on that role. Sarah’s previous role as Membership Secretary will now be a responsibility shared by the whole Executive Committee.

Report by Aberystwyth University looks at Mumbles and Hennebont

The Wales Institute of Social & Economic Research, Data & Methods (WISERD), which is based at Aberystwyth University, has published a report, in English and Welsh versions, titled ‘Welsh–Breton Town Twinning: opportunities and challenges for the future’.

Research for the report was done by WISERD researchers Bryonny Goodwin-Hawkins and Rhys Dafydd Jones. They were interested in learning about the importance of European cultural exchange to Wales and decided they would look “across the sea to Brittany”.

There are now over 40 towns in Wales with a Breton twin. One of them, of course, is Mumbles. The researchers decided to focus on two notably successful examples, Mumbles/Hennebont and Aberystwyth/St-Brieuc. They spent time with the twinning associations of all four, including several days in Hennebont.

The concise and well-presented report highlights the well-known benefits of twinning while also stating that “there are many challenges for twinning to overcome, and survival will mean change. But some things must stay the same: the values of friendship and exchange.”

You can read the WISERD report, in English or Welsh, by clicking on one of the links below: 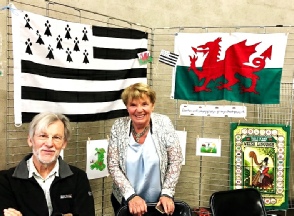