commencing 4th October. It was a fine positive demonstration of how to bring two distant communities together even though they are separated for the long haul (well-chosen pun?) by a global pandemic.

Video was HdG’s medium of choice, giving an impression of an entire town swarming for several days with amateur film-makers and virtual guides saying things such as, “Come on in!” or, “Follow me!” into handheld phones while they entered or exited a hundred doors. The resulting short films were entertaining, light-hearted and informal. But what also came over was a strong sense of pride in their own community and the environment where they lived, together with a spirit of true friendship.

Particularly enjoyable was a series of short guided tours around the homes where visitors from Mumbles would have stayed if this year’s inaugural visit to Havre de Grace had gone ahead as originally planned. There were also really interesting tours of local visitor attractions, architectural highlights, cultural institutions, green projects, and a visit to St John’s Episcopal Church, which is twinned with All Saints Mumbles.

The week started with an eloquent online welcome from Mayor Bill Martin at HdG City Hall. This was followed by a Zoom meeting during which the signators of the Charter of Twinning at the Swansea Guildhall in September 2019 affirmed the lasting spirit of the Charter, since it was impossible to have a reciprocal ceremony in Havre de Grace this year.

The final event of the week was another Zoom meeting in which members of both twinning associations (HdGTwinning and TAM), representatives of both local councils (Havre de Grace City Council and Mumbles Community Council), and various invited guests such as the vicars of the two twinned churches and a representative of the twinning association of Hennebont (our other twin town) all participated in a lively and productive discussion on topics ranging from COVID experiences to many creative ideas for growing the relationship between our two towns.

All this can be sampled on HdGTwinning’s Facebook page: https://www.facebook.com/hdgtwinning/

Hennebont (Brittany, France) in 2004 and 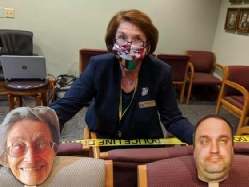