We were very sad to hear that Stuart Winks had died after a long battle against ill health. Stuart was a very active member of the twinning association since its very early days and our Chair from 2007 until 2013, when he was succeeded by Jean Bunce. Stuart was elected an Honorary Life Member of TAM in January 2017, as was Jean. With the demise of our link with Kinsale, in which he was heavily involved, he would certainly have wished to see the proposed Havre de Grace link officially launched.

Julian Smith remembers a story about Stuart “… that seems so typical. We had a day in Cardiff in April 2008 while a party from Hennebont was visiting Mumbles. We’d organised a visit to the Senedd after lunch (welcomed by AM and, at that time, Honorary TAM Vice-President Edwina Hart) and then to the Millennium Stadium, where Stuart (via a police contact) knew the head of security who had arranged a private visit for us. The month before, Wales had beaten France there to clinch the Six Nations title. Not only did the visitors get to be able to sit in the Queen’s private seat (which she has, however, never used…) and visit the two team changing rooms, but we got to see and handle the actual Six Nations silver trophy and the Triple Crown salver. The Six Nations trophy has six different lids with the symbols of each country sculpted on top – of which three, Scotland, Italy and Ireland, had never been needed up to that point, although Ireland corrected that omission the following year… The French absolutely loved handling the 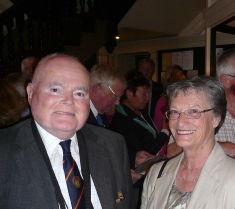 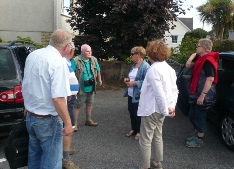 Stuart and Anne in 2014, when a party from Hennebont visited Mumbles.

trophies; many photos were shot! The security man arranged for the Marseillaise and Land of my Fathers to be played over the stadium PA system while we were visiting.”

Our whole membership sent its heartfelt condolences to Anne and their two sons.

Stuart’s funeral service took place on Tuesday 27th November at Llanelli Crematorium and was followed by a ‘bun fight’, as Stuart used to call them, at the West Cross Inn, to which everyone was invited. 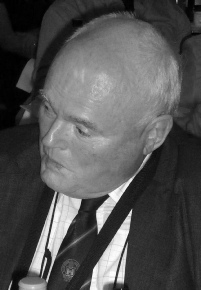