The practice was continued after the Second World War as a way to promote understanding and cross-border projects of mutual benefit. For example, Coventry twinned with Stalingrad and later with Dresden as an act of peace and reconciliation, all three cities having been heavily bombed during the war. Similarly, in 1947, the then Bristol Corporation sent five 'leading citizens' on a goodwill mission to Hanover. Within Europe, town twinning is strongly supported by the European Union.

A recent study concluded that geographical distance has very little, if any, influence upon communities’ selections of a twin town or sister city. Twinned towns are often chosen because of similarities between them; thus a number of towns in Wales are twinned with towns in Brittany (as in the case of Mumbles and Hennebont), while Oxford is twinned with Bonn, Leiden, Grenoble and other university cities. In the US, two famously twinned towns are Dull and Boring. Swansea claims its own twinning arrangements with Mannheim (Germany), Sinnop (Turkey), Pau (France), Cork (Ireland) and Bydgoszcz (Poland).

Twin towns are a form of legal and social agreement between towns, cities and other forms of community in geographically and politically distinct areas to promote cultural and commercial ties. The modern concept of town twinning, conceived after the Second World War in 1947, was intended to foster friendship and understanding between different cultures and between former foes as an act of peace and reconciliation, and to encourage trade and tourism. In recent times, town twinning has increasingly been used to form strategic international business links between cities.

The earliest known town twinning in Europe was between Paderborn, Germany, and Le Mans, France, in 1836. Starting in 1905, Keighley in West Yorkshire, England, had a twinning arrangement with French communities Suresnes and Puteaux. The first recorded modern twinning agreement was between Keighley and Poix-du-Nord in Nord, France, in 1920 following the end of the First World War. This was initially referred to as an adoption of the French town; actual formal twinning charters were not exchanged until 1986. 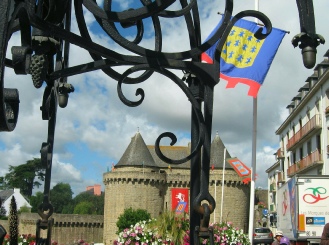 The historic centre of Hennebont plays host to a large weekly market and frequent cultural events.

The article on twinning on this web page is based on the article ‘Twin towns and sister cities’ in Wikipedia.

Click here to view the 2004 Charter of Twinning between Mumbles and Hennebont.

Click here to view the 2019 Charter of Twinning between Mumbles and Havre de Grace.

Click here for our Best Practice Guidelines for Twinning.